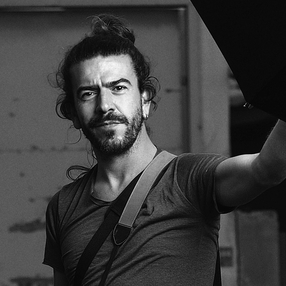 I work with all available Raw editing Softwares.

I'm an expert with Photoshop, working often as a full round retoucher and matte-painter.
On Set I recommend the use of Capture One for tethered shooting, also I have used Lightroom in several occasions.

download and backup. My monitors are always calibrated and the use Wacom tablet is a must in my set up.

I have many years experience as an assistant and photographer, having worked with all camera systems: Hasselblad, PhaseOne, Mamiya, Canon, Nikon, Sony, Fuji and more.

I have also worked with almost all professional light equipment, from strobes to continuous light

I studied both careers at the time of film photography, while I was assisting several photographers in Argentina that were in the process of shifting to dIgital systems and workflows. I assisted them often in this expansions into digital, regularly doing photoshop works for them.

I developed a career myself as a Photographer and, slowly as a retoucher too. In 2012 I was hired by an advertising agency in Middle East to work full time as an in-house Digital Retoucher, something I did in that and a few other agencies for three more years.

In 2018 I moved to live permanently in Barcelona Spain, where I started working as a Digital Image Technician (DIT) for Moonlight Barcelona, on TVC and Series. My tasks include creating and maintaining seamless digital workflows and storage of the material recorded, Grading the footage and creating and delivering dailies on set.